"Mice: But reading all the good writers might discourage you.
Y.C.: Then you ought to be discouraged."

I dreamed up this challenge in the Brazilian summer of 2018 when both kids were in bed before 9 p.m. Those days are gone. I have a son who wakes before the birds and a daughter who never really falls asleep. On bad days I fall asleep next to her. On good days, she falls asleep first and I have an hour for myself. The challenge is to use that free hour for reading literature...

never go down the netflix/youtube/socialmedia rabbit holes in Walden.)

Following Ernest Hemingway's lead seems to be a good start (here is why), so I read the books he claimed to be the greatest of all time (up until 1961, that is).

A warm April day of 1934 in Key West, Florida, Arnold Samuelson, a 22-year-old journalist graduate knocked on the door of Ernest Hemingway hoping for a conversation about the craft of writing. The next afternoon he was let in.

“What writers do you like to read?” Hemingway asked the young fellow.
“I liked Stevenson's Kidnapped, and Walden Pond by Thoreau."
“Ever read War and Peace?"
The young man shook his head.
“That's a damned good book. You ought to read it. We'll go up to my workshop and I'll make out a list you ought to read." 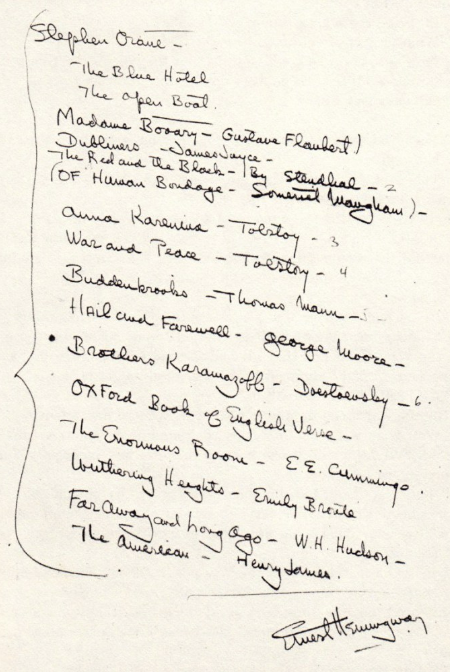 “If you haven’t read these, you just aren’t educated,”

Hemingway told the young man who wanted to become a writer. “They represent different types of writing. Some may bore you, others might inspire you and others are so beautifully written they’ll make you feel it’s hopeless for you to try to write.”

(Note to self: When you get to the Oxford Book of English Verse, these are the poets Hemingway cherished the most: Yeats, John Donne, Andrew Marvell, Robert Browning, Rudyard Kipling, Shakespeare)

Almost a year later, in February 1935, Hemingway published his "the best of the books" list for the Esquire with few variations compared to the handwritten note. Here is his second list of favorite books that, he said, he would have rather read again for the first time than had an assured income of a million dollars a year: 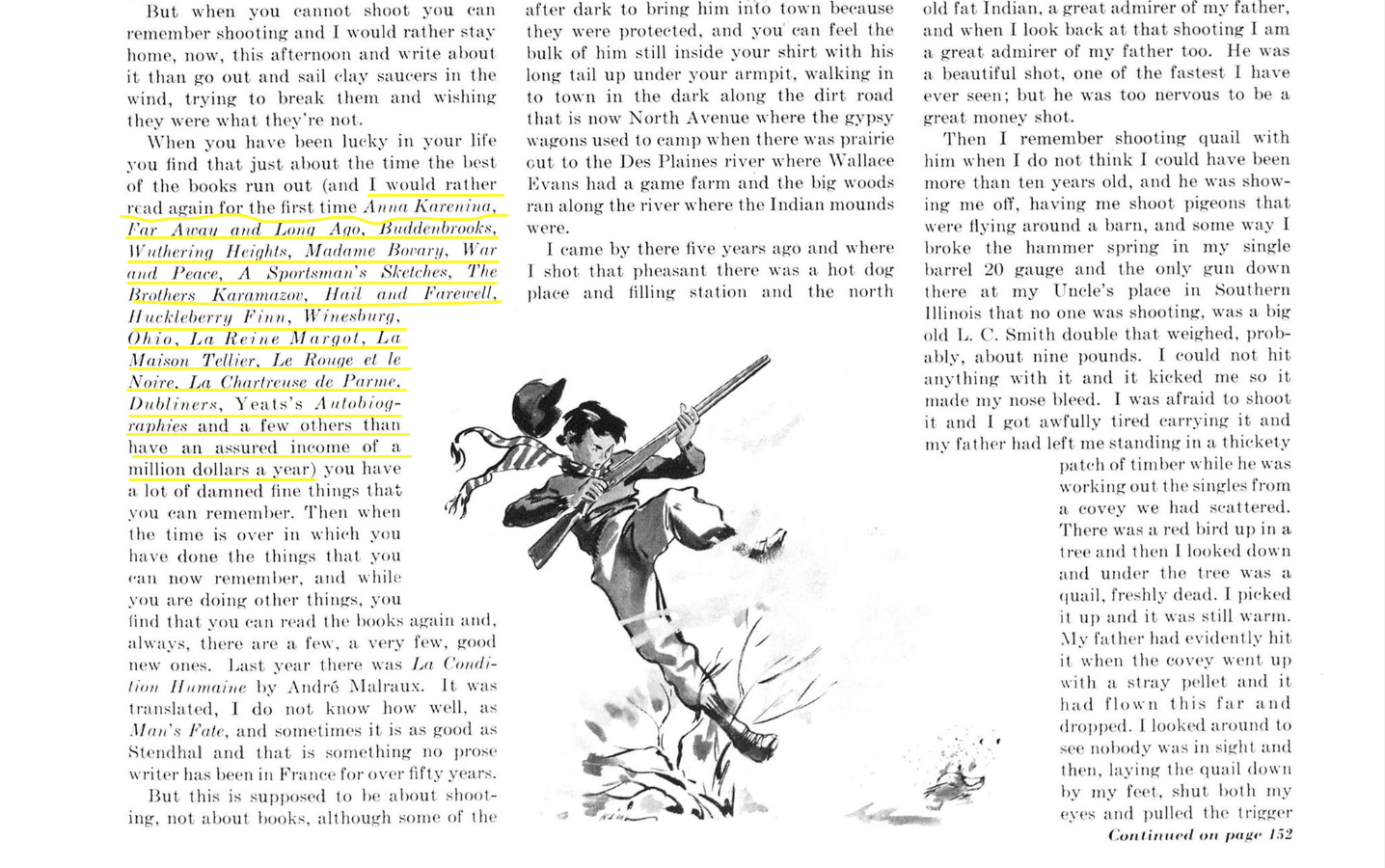 Then in October, the same year, 1935, Hemingway wrote the story of the young writer, Arnold Samuelson, knocking on his door. He titled this second Esquire article Monologue to the Maestro as Samuelson played the violin, and later his nickname was shortened to the Mice. Here is how Hemingway reworked his list of "necessary books": 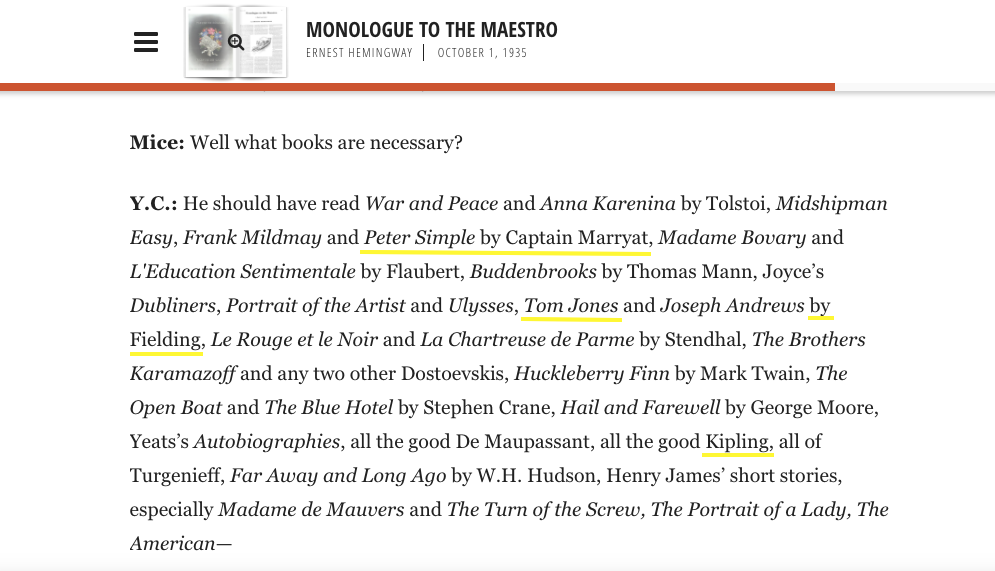 And here is where the "list-making" gets tricky. Instead of adding many more names to the list, Hemingway added more titles from his favorite authors. In certain cases (Maupassant, Kipling) he remains vague about which titles he recommends. When he writes "all the good De Maupassant", he suggests Maupassant wrote so many great stories that it'd be time consuming for him to list them all. It doesn't truly matter which ones we pick. Or so my thinking went. Turns out my thinking was off. In a 1941 letter to his editor and dear friend Maxwell Perkins, Hemingway confesses:

"I'll never forget how sick I was of "A Piece of String" and "The Necklace" of de Maupassant. But I suppose they couldn't put his good ones in the school books."

Turgenev: same story. "All of Turgenieff", Hemingway advises. Read them all. Except for Fathers and Children as I found out from a 1925 letter to his buddy, F. Scott Fitzgerald:

"Fathers and Ch-en isn't his best stuff by a long way. Some swell stuff in it, but it can never be as exciting again as when it was written and that's a hell of a criticism for a book."

Conclusion: We keep the Maupassant story and the book of Turgenev's short stories that Hemingway specifically calls as must-reads. We have Kiplings poems in the Oxford Book of English Verse and add one of his novels to the list. Which one? One that we haven't read. For me it's Kim:

The last time Hemingway crafted an answer to the question "Who are your literary forebears - those you have learned the most from?" was for star reporter George Plimpton / The Paris Review, whose interview was published in 1958. The list is once again slightly altered and for the first time Hemingway also put in painters and composers because:

"I learn as much from painters about how to write as from writers. You ask how this is done? It would take another day of explaining. I should think what one learns from composers and from the study of harmony and counterpoint would be obvious."

-Thoreau's name is the biggest news item here. Hemingway's words on him back in 1935:

"There is one [men of letters] at that time that is supposed to be really good, Thoreau. I cannot tell you about it because I have not yet been able to read it. But that means nothing because I cannot read other naturalists unless they are being extremely accurate and not literary." (Green Hills of Africa, p.21)

-King Lear of all Shakespeare on this list, as it is the only story Hemingway said (also to the Paris Review) he reread every year.

"I read some Shakespeare every year. "Lear" always. Cheers you up if you read that."

-For Thoreau, Dante and Virgil I added one of their most respected works. Which ones? The ones that I haven't read / want to reread.

Below are books that complete the list of Hemingway essentials:

This is IT. This is the master list of 45 of Ernest Hemingway's most precious books from his library of thousands.

While gathering the above titles, I exclusively used Ernest Hemingway's own such lists as my source -- his handwritten note to Arnold Samuelson, his Esquire magazine articles and The Paris Review interview that took him about five or six weeks to edit, because "You have to be goddam sure what you’re saying.”

As we will see (going forward with the Hemingway-challenge), Hemingway was also highly critical with his recommended books. The prose writers from above were his biggest competition. No one else came even close to him in the ring.

(No. Virginia Woolf was not even considered. Cross her off of your famous Hem-reading-lists, Internet! "I would have enjoyed taking the clothes off Virginia Woolf this noon and permitting her to walk down the Avenue de l'Opera letting everyone truth, reality, whatever she liked - pass her close each time." wrote a fuming Hemingway upon reading Woolf's negative review on The Sun Also Rises.)

But I need fifty.

I need 50 of the greatest books ever written as I challenge myself (and everyone reading this) to read 50 damned good books and become an honorable member of The Classics Club.

Here is how the Hemingway-list expands into a "Hemingway-challenge" of 50 of the greatest books ever written (somehow randomly but still very much Hemingway-related):

"Are there any MODERN novels with tragic heros?" I asked the man who taught me literature in high-school, one of the pre-google souls alive, with extensive knowledge and a remarkable memory.
"Read The Great Gatsby," Prof. Uhrman replied.
"Hemingway had reservations about it."
"Read The Great Gatsby."

"Not only was it his best novel, it was also his most personal, for he had written it at the dawn of an uncertain autumn, with nostalgia for the irretrievable years already lived and a poignant premonition of the few years he had left to live,"

wrote Gabriel Garcia Marquez and if it is Marquez sentiments against everyone else's, I'm damn curious.

Marquez said that Hemingway's least successful novel was his "most charming and human work". I'm going to read and find it out for myself and for everyone who trusts me and/or(?) Marquez.

Also, two Hemingway non-fully-fiction books on writing and reading that lift the curtain on my whole Hemingway-list-making process:

"Don't you want to be inspired by the zeitgeist and read Little Women?"

asked a good friend, Gabor Veress, upon the release of the Oscar-nominated Greta Gerwig movie. Hemingway's recommendation or not, Gabor was not enthusiastic to start our read along with Maugham's Of Human Bondage:

"700 pages in English about masochistic relationships???"

Therefore my dear friend, a 40-year-old successful economist, who became my dear friend at Columbia University - I don't remember how, but quickly and unalterable -, suggested we read Little Women instead: 760 pages in English about relationships without masochism...

It goes without saying, he never got passed by page 40.

Little Women is the absolute black sheep on this list. While The New Republic cites Hemingway "characterizing the book as full of sweetness and light" they do not reveal the context in which those words were uttered:

"You're so full of sweetness and light, you ought to be carrying Little Women,"

Hemingway told children's author Lavinia Russ as she walked in his Paris apartment with a copy of Ibsen's plays under her arm in the 1920s.

This is "highbrow indifference", not admiration. Hemingway was as snobbish about Little Women as I'm about Harry Potter. So I add Little Women to the reading challenge that carries his name and promise -- HEREBY I PROMISE TO MYSELF -- that before I'd close these digital doors of my online Walden cabin here for good: I will read the first Harry Potter book.

I give myself five years (= until December, 2025) to read the above listed 50 books, because doing it as quickly as possible isn't the point. The point, as with every goal in life, is to do it.