(A September 10th note on the below post, nine months after its birth: This entry, and those that follow it under The Living Ghosts tag, are what eventually became my "Writer's Diary". Yes, the secret writing journal no writer in her right mind shows to anyone - except maybe for Dostoevsky. Also because it only becomes interesting once a writer gained reputation. I leave the very beginning of my writer's diary - its first month when it was more of a daily journal than a writer's journal - here for anyone to see. For a whole month I documented every single day of my life from a "creative productivity" point of view, but only tagged the days that weren't wasted. As for what happened next, I'll make the entries that follow Day 31 private posts available for Literary Patrons. At this point transparency is all I have for readers who care about my work and I want to be as unashamed, honest and real while journaling the birth of my second book as if I was the only one reading it.)

The babysitter didn't show up today. I'm writing with my eyes on the pool where Mariska is practicing her not long enough ago-acquired swimming knowledge. When Abraham shows up -- left thumb in mouth, blanket in hand: Linus-style -- when he wakes from his nap, this post is over. At that moment I'll be done with wording thoughts for today. WRITING… Starting to write again is like starting to swim again. Ouch. Takes crazy effort to do it. My brain tries to focus so hard that it hurts. My neurons are like divorced couples. I must get them to communicate with each other again.

While becoming a mom, for the last 5 years, I've been learning hard to leave things and thoughts in the middle, safely and without getting too anxious or depressed about it. I know that I'm going to leave this post in the middle, the same way I leave the dishes, the laundry, the cooking and my thoughts at any given moment: instantly and unconsciously.

Today is the first day of unlearning all of it. I have to unlearn the crazy multi-tasking.

Today I start writing (in Hungarian, offline, far away from this blog) and swimming again. I realize swimming is already the third item on my challenges list. Swimming takes up time, it will take time away from reading and writing. I will still do it every day.

Actually... I can't start swimming just yet. Doctors advise I should wait until my pneumonia is completely gone. Until the pain disappears. Mariska is shouting that the water is freaking freezing anyway. She warms my heart.

If I am serious about writing and swimming, I'd need two things: TIME and WATER. It's very convenient that for now, for the next three months, I have the latter within reach in my garden. (In three months not only I won't have a pool, gosh, I still can't believe that there is a pool in the garden!, I won't even have my own garden -- more on that later.)
It's very inconvenient, however, that for the foreseeable future, I won't have much TIME for writing.

I signed up for a writing challenge with the knowledge that I WILL NOT HAVE TIME, not enough time anyway, to write my Story in the foreseeable future. Writing a book while attending two little ones 24/7 is an impossible challenge. Quite a few wise quotes exist out there about attempting the impossible, and these days I have an ear for them.

"The only way to achieve the impossible is to believe it is possible,"

I hear this sentence coming from upstairs and realize that the kids are re-watching Alice in Wonderland.

"Nothing is impossible, Charlie". Charlie and the Chocolate Factory.

"What we do believe: anything is possible!" Oz the Great and Powerful.

For the most brilliant thought on working on an impossible goal, however, we had to leave the sofa. I found the magic quote in the Botanical Garden of Brasilia:

"If we do not seek the impossible, we do not even achieve what is possible."

I decided to document my daily struggle to write a novel, my "Story", in the form of a diary in order to make myself accountable.* There are good reasons, however, why writers don't communicate about the project they work on:

Keep this in mind.

(*Actually...To be honest, and I have to be honest here, where else I could be honest: I only have this blog because this is my last harbor where I can still connect with people in my great sea of solitude. This is it. If I lose it, it's gonna be just me and the fish.)

Do you watch Masterclass? Among all the writers giving writing classes there, Dan Brown has been the best (as of January 2020). I've never read anything from his bestselling books and I doubt I ever will, but he is a damned good teacher. Mostly because the way he speaks about the process of creating a thriller as a doable task, is inspiring, crazy inspiring. Listening to him is like listening to a great carpenter talking about how to make a bookshelf in such a simple way that makes you want to make a bookshelf right away. IT IS POSSIBLE TO LEARN TO DO JUST THAT. People make fire. They tell stories. Some are damned good stories. Here is Dan Brown's list for building a story from the ground up: 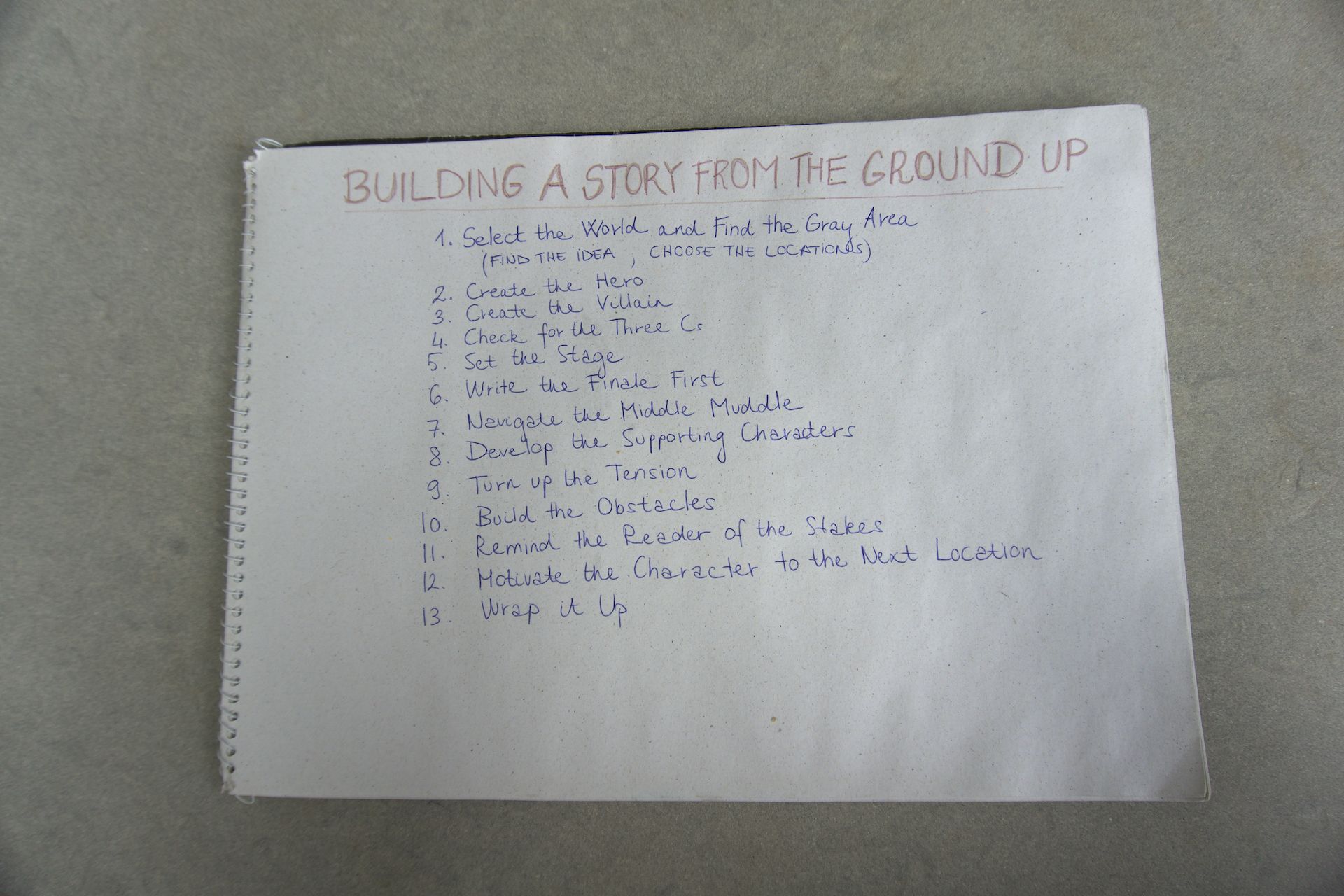 I'm going to organize my writing notes on this blog (in this post and in future posts) by following Dan Brown's "building blocks" and share some thoughts about my Story without giving away the magic that can only be put into the Story itself.

"Think of location as a character." (Dan Brown)

Once upon a time in Hungary... my heroine, Médi, was born in a vineyard of a tiny, imaginary village called Szőlőhulló. In Hungarian "szőlő" means grapes and "hulló" refers to the act of falling. Szőlőhulló is located on an island on an enormous lake. In Hungary there are no islands big enough to give home to an entire village anymore but there was a time when such island existed. It exists now in my head. Five hills surround the tiny village on this island, and these hills are covered with vineyards so rich with grapes that during the fall, when the berries fall off their plants and start rolling down on the sides of the hills, they end up burying the whole village. Ruins of a medieval castle crown the highest of the hills.

**Farmers used to inhabit the village, whose thatched roof-cottages were tiny dots on their immense lands of corn and vineyards and who sold their wine and the fruits of their lands by their own fences. By the time this story starts, the children of these farmers have moved to the cities, soon followed by their elders. The fairy-tale like village first got discovered by artists and intellectual oddbods, soon followed by the country's richest. The latter then bought up most of the lands and turned the village into a touristic holiday spot for the rich. Hotels, restaurants, wine cellars, medieval castle trips, horse carriages, white-sanded beach parties, you name it, all started to dominate and overwhelm the warm months of Szőlőhulló.

During winter time this Cinderella-village turns into a ghost village: only a few old souls, the village crazy, stay in it in their 200-year-old cottages. They are the people who wouldn't give up their land unless forced by guns. It is also in this village where my heroine, 35-year-old Médi dies. Her funeral takes place in the village cemetery under an enormous pine tree that grows on the tiny grave of a six-month-old child.

And that's when my story starts.

My five-year-old Mariska is approaching.

That "OK?" is important. It carries all the meaning of the announcement and reminds me of Shawshank Redemption's Red every single time I hear it. Except that Mariska is not an ex-felon who has been asking permission to piss for forty years and cannot squeeze a drop without say-so. Mariska isn't asking permission, quite the opposite, she is giving an order. Her "OK?" stands for: "When I shout 'I'm ready', you must come and check if I cleaned myself up properly."

I'm off to the bathroom.

I wrote this entry in three sittings. The part about The Living Ghosts Project was included a few days later. I also had to make the drawing of Dan Brown's list. The exact time I had had for blogging on Day 1 until my kid interrupted me was the time of writing the beginning and the very end of the post. I wonder if you care about details like this. Details that show that, at least for now, I spend three times as much time on journaling than on actually writing my novel. A very red flag.